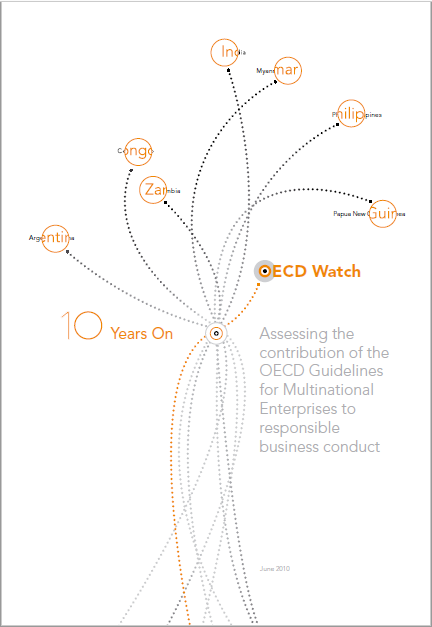 In the first decade of this century, governments of the Organisation for Economic Cooperation and Development (OECD) have been unable to protect workers, communities and the environment from harm caused by multinational corporations. This is the conclusion of OECD Watch’s latest report that was launched today at a press conference in Paris.

The report “10 Years On” assesses the effectiveness of the OECD Guidelines for Multinational Enterprises. These voluntary guidelines aim to promote sustainable development and responsible global conduct of companies based in OECD and adhering countries. OECD Watch found that lack of political will, lack of sanctioning powers and lack of coherent implementation have significantly diminished the potential value of the instrument. The recently initiated revision of the Guidelines is a make or break opportunity to help stop corporate abuses, particularly in developing countries. If no drastic improvements are achieved civil society will be forced to look elsewhere to resolve the key problems facing affected peoples and the natural environment.

Effectiveness of the Guidelines

OECD Watch has monitored the implementation and effectiveness of the OECD Guidelines over the past ten years and made an analysis of cases filed by NGOs against corporations alleging violations of the OECD Guidelines. From the first case filed in 2001 through to June 2010, a total of 96 cases have been filed by NGOs. The most common types of alleged violations include environmental damages and human rights abuses in developing countries. Such violations often occur within the supply and value chains of major multinational corporations.

In those cases where a complaint was filed, National Contact Points (NCPs) rarely contributed to resolving specific conflicts. OECD Watch’s analysis reveals that most NCPs are failing to promote the Guidelines or impress upon companies the importance of adherence. When issues are raised with governments, most NCPs will not investigate the validity of the claims. According to Joseph Wilde-Ramsing (OECD Watch).“Only 5 of the 96 cases filed by NGOs have resulted in real improvements in corporate behaviour. In another 10 cases, NCPs have made useful recommendation to improve business conduct, but which have ultimately not materialised in concrete improvements. The remaining 84% of cases have failed to make any significant contribution to resolving the conflict.”

Ten years of NGO experience with the Guidelines indicate that they are inadequate as a global mechanism to improve the operations of multinationals. “Without the threat of effective sanctions, there is little incentive for companies to ensure they are in compliance with the Guidelines” underlines Patricia Feeney (RAID), one of the authors of the report.

Civil society organisations across the world will continue to press for better global standards and the establishment of an effective remedy to deal with the negative impacts of business operations. The task ahead for the OECD and adhering governments is clear: If the OECD Guidelines are to be considered a credible, legitimate and enforceable standard to resolve corporate abuses and promote responsible business behaviour in the 21st century, then radical reforms are necessary. If the review fails to address the shortcomings outlined in the OECD Watch report, it will further erode the influence and effectiveness of the OECD Guidelines.