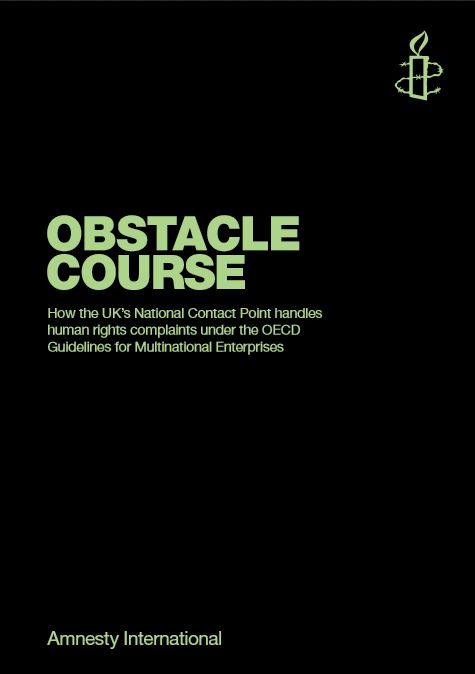 In its new report “Obstacle Course: How the UK’s National Contact Point handles human rights complaints under the OECD Guidelines for Multinational Enterprises” Amnesty International UK exposes OECD Guidelines as a system that is not fit for purpose as it lets companies off the hook when human rights abuses are alleged against them. The NCP’s treatment of complaints, the report says, is inconsistent, unreliable, biased towards businesses and out of kilter with the standards it is supposed to uphold.

Amnesty’s International report criticises the UK NCP on multiple aspects. The report expresses concerns about the high number of complaints in the last five years have been rejected without investigation or have been referred to other NCPs, leaving individuals and whole communities at greater risk of abuse. Amnesty International also is concerned that the NCP staff, civil servants housed in the Department for Business, Innovation and Skills, are unqualified to make complex human rights judgements and lack the resources to properly investigate claims put to them. At the same time Amnesty International maintains that the NCP insists that complainants put forward a level of evidence higher than that required by the OECD Guidelines and higher than that which the companies are required to provide in their defence.

Amnesty International concludes that the shortcomings of the UK’s NCP send worrying signals to companies that contributing to human rights abuses is acceptable. Its failure to investigate cases properly has allegedly allowed companies to avoid accountability, even in past OECD Guidelines cases where serious abuses are alleged. The report refers to cases filed against BT for providing communications and surveillance services to a military base in Djibouti from which armed US drones carry out lethal missions over Yemen and Vodafone, BT and others allowing GCHQ access to its networks for the mass interception of data which it then shared with the US authorities.

Amnesty International is calling on the UK government to incorporate into the NCP a panel of experts with sufficient human rights experience to assess complaints fairly, to ensure that their appointment is overseen by an independent body rather than BIS, to end the requirement for unreasonably high levels of evidence from complainants and to ensure that assessments take into account the possible future human rights impact of a company’s activity. Furthermore, when a company is found in breach of the guidelines it should face consequences in keeping with the gravity of the breach, such as denial of access to export credits.