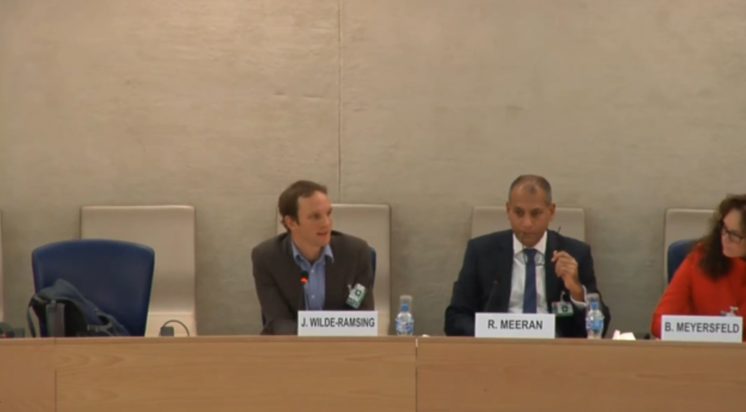 During the opening, “Introduction to Remedy” panel of the 6th annual UN Forum on Business and Human Rights, SOMO and OECD Watch’s Joseph Wilde-Ramsing got anatomical to describe the relationship between judicial remedy and non-judicial remedy.

Joseph used the anatomy of the human body metaphor to provide the audience with his insights, describing judicial remedy as the backbone of the remedy system.

“If we think about the relationship between judicial remedy and non-judicial remedy, judicial mechanisms are like the spine, the backbone of the system that we cannot live without. It’s the core from which all the strength of the system is derived. It is necessary to keep the entire system upright. Without it, the system collapses.

Turning to another human anatomy metaphor, Joseph explained the importance of non-judicial remedy.

“In contrast, non-judicial remedy can be imagined as the fingertips of the same system. The fingertips are more sensitive and can potentially get in to more places. They can get further away and can treat issues before they become serious abuses, which, once  that happens, you really need to rely back on the backbone of the system to address the issues. But the fingertips are more numerous and can be more attuned to particular relationships between companies and communities and workers. However, without the judicial backbone, the non-judicial fingertips lose their feeling and become numb, ineffective appendages. It is for this reason that a binding treaty on business and human rights at the UN level is so crucial – to establish a common backbone of judicial remedy while continuing to work with the non-judicial fingertips to ensure that effective remedy is provided to all those whose rights have been violated through business activity.”