The highlights of this Quarterly Case Update include re-filing of case against BT after new information substantiating a link between BTs services and US drone operations has been uncovered. New cases alleging breaches of the OECD Guidelines have been filed against ANZ Bank, G4S, Rabobank, F1 One Grand Prix companies, and Kinross Gold. Also in this Quarterly Case Update are updates on progress in the cases involving Andritz, ENRC, Statkraft and Socapalm. The UK NCP rejects the cases against 6 UK telecom companies, arguing insufficient substiantiation of the link between companies and mass surveillance by the UK government. The Canadian NCP uses flawed and unsubstantiated reasoning to reject the cases against Corriente Resources and CRCC Tongguan more than a year after filing. Final statements have been issued by German NCP on the cases against Karl Rieker and KiK and the UK NCP in the case against GCM. Unable to get GlencoreXstrata to come to the table, the Argentine NCP closed the glacier mining case and criticises GlencoreXstrata for its refusal to engage in mediation. 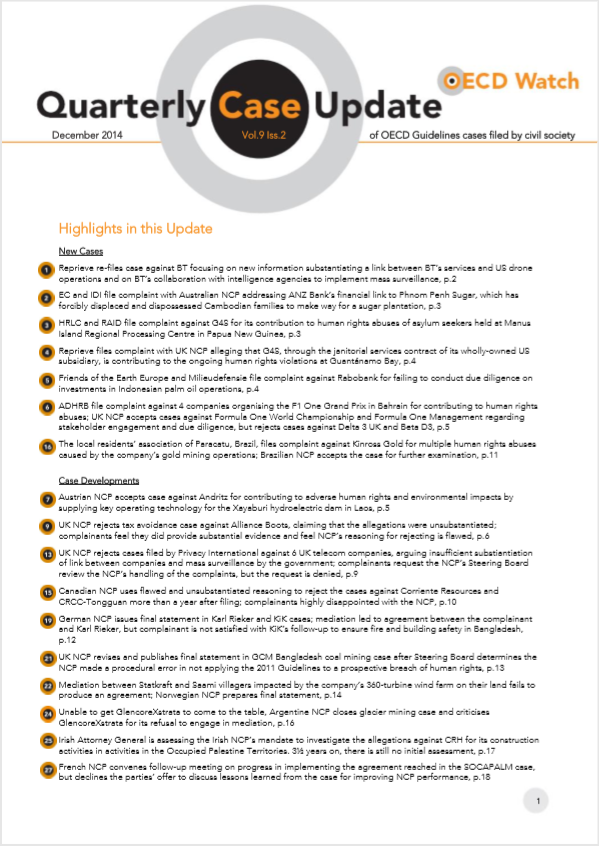