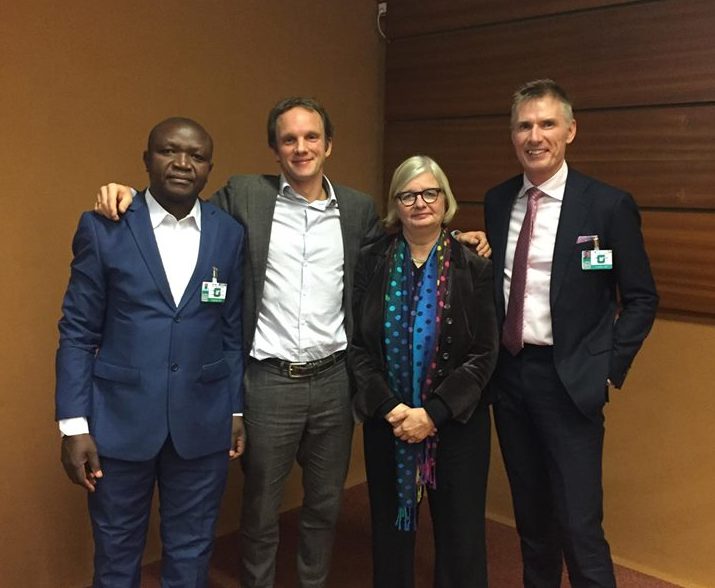 During a panel discussion at the 6th annual UN Forum on Business and Human Rights, in Geneva, Switzerland, representatives of OECD Watch, Heineken, the Dutch NCP, and victims from the Democratic Republic of Congo (DRC) discussed the successful process towards remedy following business-related human rights abuses by Heineken.

With OECD Watch’s assistance, the case under discussion had been filed with the Dutch NCP in 2015 by 168 factory workers previously employed by Heineken’s Congolese subsidiary, Bralima, for violations of labor rights during 1999-2002, as a civil war raged in the eastern DRC.

During the panel discussion, it was revealed that the NCP process led to a deal between the victims and Heineken that involved Heineken paying approximately US$2 million in compensation to the victims, including up to US$45,000 to some individual workers and widows of former workers, as well as making important forward-looking policy changes regarding doing business in conflict-affected areas. The panelists analyzed the factors that led to this success, particularly some elements of the Dutch NCP’s handling of the case that were instrumental. Six key secrets to success emerged from the discussion:

1. No statute of limitations

The abuses in this case originally took place in 1999-2002, 15 years before the case was filed with the NCP. Some NCPs employ a statute of limitations (in some cases of just one year!), which would have led them to immediately reject this case, and mediation would have never even been possible. The Dutch NCP does not have a statute of limitations, but rather accepts all cases on their merits and actively seeks out areas it can help resolve disputes, even long-standing ones.

2. Acknowledgement that remedy is the reason for the NCP system

The complainants in this case specifically requested financial compensation. Some NCPs would have immediately rejected this request and thus the case, falsely claiming that NCPs can only handle forward-looking requests and that they cannot deal with demands for remedy for past harms. This ignores the fact that most of the users of the NCP system are seeking remedy for past harms, as well as being interested in forward-looking improvements. The Dutch NCP, on the other hand, recognized that remedy, which can take many forms, is the reason for the NCP system and demonstrated that both restorative and forward-looking remedy are possible through the NCP system if NCPs recognize that this is their purpose.

The panel discussion at the UN Forum revealed that the Dutch NCP faced early pressure to reject the case. Most NCPs are housed within a single government ministry or a limited number of ministries and have no independence from government positions. But the Dutch NCP is one of only four NCPs in the world with an independent structure and multi-stakeholder participation that allowed it to resist pressure, accept the case, and continue to handle it in a manner that the NCP’s independent experts knew was the correct and just way to do so.

The chair of the panel in Geneva started the session off by asking Heineken why the company decided to engage constructively in the process with the Dutch NCP when so many companies simply ignore NCP cases altogether. Indeed, in most countries with an NCP, there are few – if any – consequences for companies that simply refuse to engage in an NCP process. However, the Dutch NCP is one of a handful of NCPs that makes it clear to companies at the outset that if they refuse to engage in the process or if mediation fails, the NCP will do its own investigation and make a public determination as to whether the company abided by the OECD Guidelines. This provides a clear and important incentive for companies to engage. The Dutch government is also one of the very few OECD governments that attach concrete consequences to a company’s failure to abide by the Guidelines. If the NCP determines that a company breached the Guidelines, that company will not be eligible for Dutch export credit guarantees nor other forms of Dutch state support. These are the kind of incentives to which companies respond that can get them to the table.

The Dutch NCP made itself accessible to the complainants in the case by sending the mediator to meet with the complainants and the company at their home town in the eastern DRC and translating key documents from French to English and vice versa. Most crucially, the Dutch NCP helped cover the costs for three of the victims to travel to Kampala, Uganda, to attend mediation meetings. The victims would have never been able to pay for these costs on their own, and without the financial assistance from the Dutch NCP, the mediation could not have taken place. The Dutch government adequately resources the Dutch NCP, enabling it to implement these accessibility-maximizing practices.

As is instructed by the OECD Guidelines’ Procedural Guidance, the Dutch NCP handled the case in as transparent a manner as possible. The NCP published the initial assessment on its website, and did not insist on strict confidentiality from the parties. The NCP welcomed the role of OECD Watch members in the Netherlands and the DRC as advisors to the complainants, and the involvement of OECD Watch has been recognized by both the complainants and the NCP as a key success factor in the case. Other NCPs, such as the US NCP, apply unnecessarily strict confidentiality restrictions and have even threatened complainants with rejecting their case if they were to ask OECD Watch for advice. This type of gag order exacerbates the power imbalance between victims and multinational corporations, is contrary the core NCP criteria of transparency, and diminishes the chance of success in cases. In fact, media attention surrounding the Heineken case appears to have helped the NCP and contributed to the success of the case. During the panel at the UN Forum, the Heineken representative stated that media and public attention around the case (a number of newspaper articles were published during the course of the case) helped convince management to engage constructively in the NCP process and incentivized the company to genuinely seek to resolve the case through the NCP system.

The truth about these six secrets to success in the Heineken case is that they are not secrets at all. They can be easily replicated by NCPs in other countries if there is the political will to do so. If the OECD Guidelines and NCPs are going to play any sort of meaningful role in the corporate accountability and business and human rights arena it is crucial that countries find that political will. OECD Watch’s new campaign is aimed at generating that political will by demanding #EffectiveNCPsNow and reminding everyone that #RemedyIsTheReason.