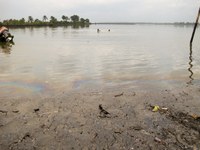 The Dutch NCP issued a final statement in the OECD Guidelines complaint against Shells in which it finds that Shell’s statements on the oil spills were based on flawed investigations and disputed evidence. The NCP furthermore found that Shell’s general communication with stakeholders about the percentage of oil spills caused by sabotage was flawed. Complainants nevertheless regret that the NCP did not comment on whether Shell’s failures constituted a breach of the Guidelines nor made a full assessment of the evidence provided or an investigation whether Shell’s statements were indeed misleading.

In January 2011 Amnesty International And Friends of the Earth Netherlands filed an OECD Guidelines complaint alleging that Royal Dutch Shell has breached the OECD
Guidelines by making false, misleading and incomplete statements about
incidents of sabotage to its operations and the sources of pollution in the
Niger Delta. Specifically, the complainants are concerned by Shell’s
repeated misleading claims about the high proportion of oil spills in the Niger Delta that
are due to sabotage committed by criminal gangs.

Although Shell headquarters initially tried to
distance itself from the Nigerian operations and referred the NCP to the local
subsidiary, the NCP insisted that the parent company must take
responsibility and exert its influence over subsidiaries to ensure that they
are abiding by the Guidelines. Shell headquarters eventually agreed to take part
in the mediation that eventually did not lead to an agreement between the parties.

One of the main stumbling blocks in the negotiations was Shell’s demand
that the complainant’s would guarantee that they would not publicly disclose
information related to the pre-2011 oil spills that were to be discussed. This unacceptable demand for the complainants proved
insurmountable for the dialogue. Throughout the process, the complainants repeatedly
expressed serious concern that the Dutch NCP allowed Shell to dictate the
parameters for the dialogue, which effectively left unaddressed all past harm
done to the people of the Niger Delta as a result of Shell’s flawed statements.