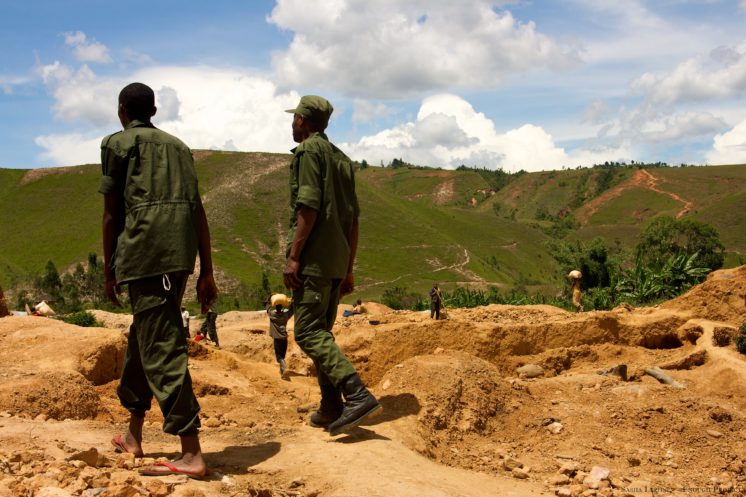 This year I was threatened as a result of my work. Although not for the first time, this is the strongest intimidation I’ve received so far.
Some of those who heard the threat relayed it to me. It came from a senior Congolese official and went along the lines of ‘if she comes back here [to DRC] I’ll have her arrested’.

The threat was made because last year Global Witness wrote a report. The report relates how a private Chinese company that, in 2015, gave AK47s to insurgents operating in eastern Congo in exchange for access to gold. The company then sold that gold internationally, including to firms in Dubai.

Shareholders of that Chinese company have attended the OECD forum on responsible mineral supply chains. It is opening for the 11th time at the OECD in Paris on 2 May.

Some Congolese mining authorities knew about the Chinese company’s operations. They have attended this forum as well and no doubt will go on doing so.

The Global Witness report was published last July. Since then, no one has been held to account.

Instead, civil society is being threatened for exposing the truth. Threatened for reporting on something that the Governor of South Kivu – the province where the gold rush happened – and the mining authorities should be busy resolving.

Instead, some authorities have defended the company in question.

This is the sixth year that I’ve attended the OECD forum on mineral supply chains. I’ve watched it evolve and seen how understanding of the OECD Due Diligence Guidance and a new way of doing business has grown and become accepted by a wide group of companies and some government representatives.

I have been encouraged by instances of joint endeavour along the way. But it’s clear to me that the work is far from done.

When I was threatened, I joined ranks of colleagues in Congolese civil society who have received similar – and far worse – threats for many years. They too are threatened because of the work that they do to uncover injustices and human rights abuses linked to mismanagement of Congo’s vast natural resources.

Sadly, threats like these to civil society are growing, and not just in Congo.

This year Global Witness reported on over 120 people killed in Honduras since 2010 after standing up to companies that grab land or trash the environment.

Putting supply chain due diligence into practise involves companies, governments and civil society, each with different roles and responsibilities. Civil society monitoring and independent oversight is a critical part of building a responsible and transparent mineral trade.

Threats against civil society that independently monitor and comment on natural resource management have no place in this work – in fact, they undermine it. Closing civil society space jeopardises the very principles that the OECD Guidance and its multi-stakeholder engagement are based on.

This week’s conference brings together civil society from all over the world: Colombia and Norway; Congo and Myanmar; Great Britain and Afghanistan. We bring first-hand accounts of what is really happening along supply chains where we live or work.

I hope that at this 11th forum delegates will hear our observations and reports and be inspired to do better. That they welcome and evaluate the scrutiny that civil society reporting and insight bring and use it as an opportunity to improve, go further.

I hope they acknowledge that when the space for civil society to operate independently and safely shrinks, we are all made poorer.

Civil society organisations do not have a bottom line to protect or shareholders to appease. We are at this forum in the hope that together we can work with companies and States in common endeavour to change the world’s current sourcing model to one that is equitable and safe for everyone involved, right along mineral supply chains.

That is our vision for fairer, safer supply chains in the future – and that is what we have come to this forum to help realise. We hope delegates from all sectors support this.