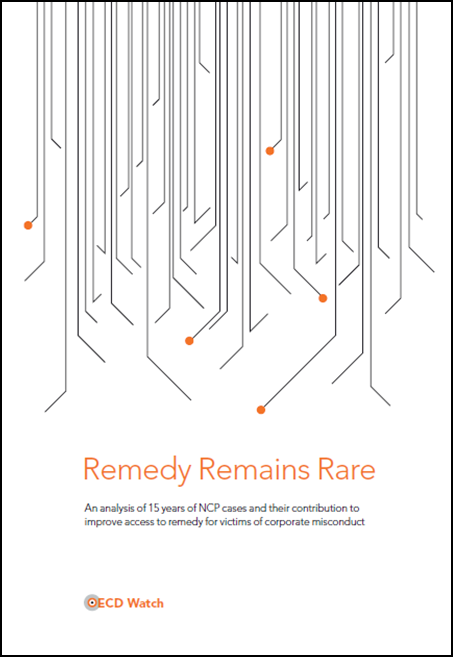 Allegations of corporate wrongdoing lodged under the OECD Guidelines for Multinational Enterprises over the past 15 years almost never resulted in companies being held accountable, OECD Watch’s new analysis of cases has found.

Remedy Remains Rare examines 250 complaints brought by communities, individuals and organizations under the national contact point (NCP) system, a grievance mechanism established by OECD governments in 2000. The system aims to resolve disputes between companies and the victims of environmental, labour, and human rights violations, which include deaths, injuries, displacements, land and natural resource theft, corruption, intimidation and pollution.

“The complaint process has tremendous potential to help advance corporate responsibility, but it is currently failing in its mandate. Far too many complaints are rejected outright, and of those accepted, the vast majority do not result in outcomes that end corporate misconduct, provide victims with remedies for harms incurred, or bring about changes to corporate behaviour,” said Dr. Joseph Wilde-Ramsing, Coordinator of OECD Watch, a global network of more than 100 civil society groups and non-governmental organisations that published the report.

As governments gather in Paris this week for the OECD Global Forum on Responsible Business Conduct, OECD Watch is asking for a revision of the procedural guidance governing national contact points in order to bring about specific improvements to the way they execute their duties.

“We are calling on governments to strengthen their commitment to this system and to bolster its capacity,” Wilde-Ramsing says.

The network’s research found that the complaint system is often inaccessible for community groups due to procedures that add unnecessary complexity and expense. National contact points often insist upon burdensome amounts of evidence and apply unreasonable standards of proof, even at early stages in the process. Also, many NCPs are viewed as lacking independence and impartiality, and operate without sufficient transparency, the report says.

“Countries adhering to the OECD Guidelines have a legal obligation to implement them. That includes maintaining national contact points that provide good offices for complaints and treat parties equally. To date, NCP functioning has been highly inadequate and the victims of corporate abuses have suffered for it,” said Caitlin Daniel, lead author of the report and staff attorney at OECD Watch member Accountability Counsel.

“Of the 250 cases we examined, only three – a mere one per cent – led to an actual improvement in conditions for victims of corporate abuse. Only a further thirteen per cent had any sort of beneficial result, such as an improved corporate policy,” Daniel said.

Considering the high level of inconsistency that the report found between each country-level national contact point, OECD Watch recommends that regular peer reviews be undertaken to evaluate each NCP’s performance. Another practical and immediate way to improve the process would be to require NCPs to adhere strictly to prescribed timelines. Additionally, in order for the system to prevent harms from happening, it is critical that complaints related to the potential impacts of companies’ planned activities are accepted.

Further, when a company refuses to engage in the complaint process, NCPs should make a determination about whether or not it is in compliance with the OECD Guidelines before concluding the case. Most are reluctant to do so, the data shows. When an enterprise is found to have breached the Guidelines, it is then the responsibility of its home government to ensure that material consequences result.

“If the NCP system is to remain relevant in the shifting landscape of corporate accountability, a system-wide change is needed to achieve a more standardised treatment of complaints, with an ultimate focus on providing a forum for remedy for corporate misconduct,” the report concludes.